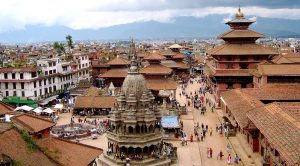 Nepal is situated in Southern Asia between Asia and China and the official language spoken there is Nepali. The population is 29,717,587 as of July 2018. Nepal is among the least developed countries in the world, with about one-quarter of its population living below the poverty line. The country is heavily dependent on remittances, which amount to as much as 30% of GDP. Massive earthquakes struck Nepal in early 2015, which damaged or destroyed infrastructure and homes and set back economic development. However, efforts have picked up speed to restore the country back and the country’s GDP grew by 6.3% in FY2018 despite less favourable monsoons and the easing of rapid growth that ensued following the trade blockade in FY2016. The number of people with access to formal finance is rapidly increasing in Nepal. As per the UNCDF, more than 60% of the population of Nepal has access to formal finance. The number of e-banking users has also been increasing, and as per the latest data of Nepal Rastra Bank (NRB), more than three million people use e-banking in Nepal. Digital wallets too are on rapid expansion mode as a latest trend.

The objectives of the project were to:

Amarante supported in testing the :